A Note from Performing Lines

2020, for all its challenges, has been a significant year for the Performing Lines team. We took Anthem, a blistering and powerful work about contemporary Australia in all of its political complexity and cultural diversity, to Sydney Festival and Perth Festival after premiering at Arts Centre Melbourne for Melbourne Festival. The Rise and Fall of Saint George by Paul Mac and Lachlan Philpott came to life in Hamer Hall as part of Midsumma, bringing together New South Welsh and Victorian artists for a joyful piece of queer storytelling.

Jessie Lloyd‘s Mission Songs Project, which explores the forgotten history of Aboriginal and Torres Strait Islander music written and adapted by those who lived on the missions, embarked on the start of a national tour. For obvious reasons the tour was interrupted but, in a testament to Jessie’s ingenuity, the whole show was reimagined as a 10 part digital series which now lives in perpetuity on ABC iView. Up north in Brisbane Festival, The Farm‘s Throttle became our first show to open post-covid engaging a host of volunteer dancers for a wild and immersive B-movie horror experience.

In Sydney Betty Grumble‘s extraordinary queer feminist call to arms, Enemies of Grooviness Eat Sh*t, premiered to a sold out season at The Red Rattler in Marrickville. And after five years of development, Sunshine Super Girl, Andrea James‘ biographical play about Australian sporting legend Evonne Goolagong, took to the stage for the first time for a world premiere on Wiradjuri Country with Griffith Regional Theatre.

And leaning into the digital infrastructure that has arisen as a result of covid Performing Lines also delivered a groundbreaking digital residency with Merrigong Theatre, offering new and accessible ways of engaging with regional artists.

Our beloved Melbourne branch did it tough this year, with Zoom replacing the usual bustling theatre foyers and impossible-to-book rehearsal rooms. 2020 started with an almighty bang though, as the stories set on iconic Melbourne train lines met new and enthusiastic audiences in Sydney Festival and Perth Festival through Anthem. Our beautiful Indonesian collaborators joined us as part of Asia TOPA with The Seen and Unseen, an unforgettable experience witnessed by colleagues from all over the world who gathered for what turned out to be some pre-lockdown “last drinks” at APAM. Pony Express forged through the knots of Deep Time with their creative development of Epoch Wars, supported by Asia TOPA and also profiled at APAM.

As the first lockdown turned to sourdough starter clichés, Pony Express took their battle to an online world-building lab with 5 new collaborators across Asia, whilst the team of The Seen and Unseen made a mini-documentary about the creative process. We flinchingly embraced the word “pivot” whilst churning out revised plans and new funding applications, re-wrote Covid safety plans to incorporate the latest info from our daily media briefings, and gradually watched the infection numbers drop. Despite sealed state borders, Liesel Zink’s ambitious work for 100 performers, Us and All Of This, saw a creative development on the Gold Coast, and THE RABBLE were the first brave souls to venture back in the rehearsal room to develop their new work YES – duly masked and hand-sanitised – as soon as that was allowed in Melbourne. To cap off the year, together with Metro Tunnel and Arts Centre Melbourne we supported an open EOI process for a new public realm commission led by Deaf and disabled artists – and this commission of Women’s Circus is one to truly look forward to as audiences connect with shows once more in 2021.

A Note from the Team at Performing Lines WA

As we know, 2020 has been a pretty intense year for everyone, forcing us to think creatively – something that was already in our DNA. However, strangely, 2020 also provided us with possibility to stop, think, connect with each other and re-imagine how we can work in the arts and our wider community.

In 2020, Performing Lines WA focused fiercely on supporting artists and strengthening the WA Arts ecology. We did this by producing a number of programs.

We delivered the PLWA Creative Hub, an ambitious month long artist residency where over 85 artists, producers and speakers came together. This initiative also made space for a curated public program of talks, discussions and rigorous thinking to ensure we were reducing silos across the industry and remaining inclusive.

We also delivered a Cultural Diversity Lab; a 4-day intensive led by Producer Zainab Syed to develop emerging culturally diverse artists who were mentored by Arts Leaders across the country.

In the latter half of 2020 we shared our expertise with a Producer Lab – led by Producer Jen Leys, to build practical skills and connecting independent producers across the state, including 5 regional producers.

And we also launched a new Co-working space in King St Arts Centre, in collaboration with all the resident Arts Organisations, to provide a free creative space for independent artists to work, dream and be together

But most excitedly, this year we also secured the presentation of 4 new West Australian works which will premiere at Perth Festival in 2021, including:

Galup by Ian Wilkes and Poppy van Oorde Grainger, with an oral history by Elder Doolan-Leisha Eatts
Children of the Sea by Jay Emmanuel
Slow Burn Together by Emma Fishwick
Black Brass by Mararo Wangai

Click here to have a look at the trailer of what’s awaiting in the new year for PLWA and click here to register and receive early bird ticket information for 2021 season offerings.

A Note From The Team at
Tasmania Performs

In 2020 we stayed busy making sure we were ready to engage with creatives, performers, partners and festivals when the borders re-opened. Luckily, timing was on our side with borders opening up to Aotearoa/NZ just in time for rehearsals of Hide The Dog. Many thanks to all the artists who trusted Tasmania Performs with their projects during this difficult year, and the 2020 team – Morgan Barnsley, Lucinda Toynbee Wilson, Maria Pate, Simon Rush, Robert Jarman and Annette Downs.

Thanks to our artists, staff and supporters we were able to deliver another year of excellent programs.

This year’s Artist Residency was bursting with creative talent and was the largest ever! A total of 20 selected creative participants came from a diverse range of performing arts forms and were hungry for the opportunity to develop their ideas. Thanks to the Tasmanian mentors, all exceptional leaders, who stepped in when COVID prevented our usual national cohort.

This year, thanks to Lucinda Toynbee Wilson, Tasmania Performs also trialed a writers residency in partnership with Blue Cow’s development program. As a result of the residency new work is being developed, partnerships forged, and performances will be seen in local festivals and further away soon! The Tasmania Performs Artist Residency was supported by Elise Archer MP, Minister for the Arts, through Arts Tasmania and Tarraleah Estate.

And of course the best thing about a long-term investment in structured mentoring is the production outcomes and in 2020 we were able to develop a number of phenomenal shows including a new work by Nathan Maynard (pakana).

Nathan was the first artist in the Aboriginal Mentoring Program during which time he wrote his first play The Season. Nathan now has as successful career as an in-demand playwright and emerging director. His most recent work, Hide the Dog, co-written by Nathan and Jamie McCaskill (Māori), will be part of the Sydney Festival (13–17 Jan) and Ten Days on the Island (19-21 March).

This Tasmania Performs production is a trans-Tasman creation, bringing together First Nations performers and creatives in a celebration of adventure, friendship, and the restorative power of culture. A recent 3-week rehearsal in Hobart brought together cast, crew and creatives from around Australia and New Zealand, which was a minor miracle to achieve in the midst of a pandemic with artists signing on to go through quarantine multiple times!

Another show developed in 2020 is Sinsa Mansell’s BlACK; a  contemporary dance piece about the indentured servitude of First Nations women in the early 1900s. Sinsa is a passionate and proud Tasmanian Aboriginal woman from the North Eastern region of lutruwita/Tasmania. BlACK is Sinsa’s first solo work and we were thrilled when she approached Tasmania Performs to produce it. During lockdown she worked with various leading artists via zoom. Through this process she formed a connection with acclaimed director, Kate Champion who will work with her to co-direct the show, which you’ll be hearing more about in early 2021.

In 2020 we were also able to further develop and stage Who Cares, written and performed by Hobart artist Helen Swain, and directed by Carrie McLean. Who Cares, combines autobiographical, fictional and verbatim dialogue using humour and compassion to illuminate the challenges and contradictions inherent to caring for another person inside your own home. Who Cares was seeded at the 2018 Tasmania Performs Artist Residency, developed with support from the City of Hobart and it’s recent tour in October (Moonah, Huonville, Sorell and Launceston) was presented by Carers Tasmania and Care2Serve.

And in 2020 one of our proudest achievements remains the First Nations Mentoring Program, which is designed to support our aim of identifying and developing relationships with performing artists at critical points in their careers. Since 2012 the Mentoring Program has focused on working with several emerging Indigenous artists, helping them develop skills and industry opportunities. In 2020 we were able to work with Kartanya Maynard, Nunami Sculthorpe-Green, Jordy Gregg, Jamie Graham and Denni Proctor; a collection of profoundly talented and intuitive artists. 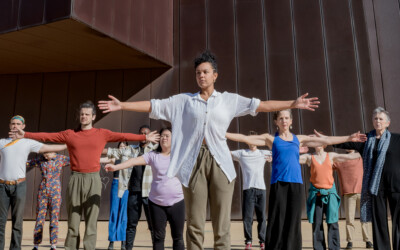